The Role of Current Events in a Writing Class

I went to bed thinking about a post on how to effectively and efficiently conduct writing conferences, but when I pulled up the front page of the New York Times over breakfast (see below), I started to think that another post might be more appropriate.

What I saw was a van used as a terrorist weapon, sharp divisions fracturing the country, potential nuclear war in Korea, people fist-fighting in the streets, an opioid epidemic that has claimed more lives in the last two years than the entire Vietnam war, and, I can’t believe I’m saying this, the rise of modern-day Nazis. And that was just on the first half of the first page.

It feels safe to say that we are currently living in a troubled moment. In fact, that is probably one of the few things that people across the political spectrum currently agree with each other about. And in such moments, as a classroom teacher it is important to occasionally put one’s original plan on the shelf for later and move in a new direction. So instead of talking about writing conferences (don’t worry, that post will come in a few days!), today I’m going to look at the role that current events, especially difficult and controversial ones, should have in a writing classroom.

As teachers, we often silo our classrooms from the outside world. We close the door, ask students to put phones away, and spend the next 55 minutes floating with Huck Finn down the Mississippi or examining how Martin Luther King Jr. is able to effectively work in 27 examples of parallel structure into one page.

In many ways, the fact that a classroom allows us to exchange our world and problems for someone else’s world and problems or offers us beautiful distractions in the form of art and ideas is wonderful, and I’d be lying if I said that these exact types of escapism aren’t a part of why I love the classroom so much. But if we teachers always close our doors to outside events in favor of Gatsby’s world or sitting with Langston Hughes during Daybreak in Alabama, I believe we do a significant disservice to our students for the following reasons.

Writing is a powerful way to process a difficult world

Many students come into our classes struggling with what they hear and see in the world. These struggles are especially acute during fraught times like these. In a wonderful piece this morning in Moving Writers, Jay Nickerson eloquently argues that as humanities teachers we are obliged to create safe spaces where students can grapple with the world’s problems, and I couldn’t agree more. As writing teachers we have one of best tools available for helping students navigate through turbulent waters. Here are some of the ways that writing can help students to process a difficult world:

Including current events can increase motivation and interest

This year my student teacher did her focus unit on The Bluest Eye, and it is safe to say that the unit did not get off to a good start. The reason for this is that The Bluest Eye contains some of the most difficult subject matter imaginable. On the first page we learn that a main character is raped by her father and becomes pregnant, and from that point on the characters must navigate a horrifying world of neglect, abuse, and sexual violence. During the first couple days of the unit, many students were clearly scared of the book and had decided to engage with it from a distance, if they engaged it at all. In an effort to fix this, the student teacher wisely brought in a news story about another local district that had recently banned the book and asked the students whether The Bluest Eye should be taught in high schools. While the discussions of the first chapters had been largely silent and awkward affairs, this question quickly blew up into a passionate debate that engulfed the whole class and ranged from censorship, to Planned Parenthood (this was during the Presidential election), to sexual assaults on college campuses. And afterwards the engagement with the book, both in the number of students reading and the number of students closely reading, stayed remarkably high.

Seeing this unit catch fire when the fictional world of Pecola, Claudia, and Frieda met the current events of the fall of 2016 reminded me that the whole point of our classes is to prepare students for the outside world. We as teachers understand that everything we do is meant to help students beyond the classroom, but it is remarkable how often students don’t. This is a problem because, as Dan Pink so thoughtfully puts in his book Drive: The Surprising Truth About What Motivates Us, one of the main drivers of motivation is purpose. If students feel that there is a larger reason for something or if it connects to something that they already feel strongly about, they generally develop more interest and motivation. And arguably the best way to show our students how the content of our classes relates to their worlds is to put the two side-by-side so they can see all the connections that exist.

My school is not back in session yet, but when we get back, my first major writing assignment will ask students to take on one of the dizzying array of current events currently being debated across country. The assignment itself will be a variation on an assignment I reference in an earlier post about how to get students to like writing  where I ask students to write an argument about something they’d like to see changed to someone or something that can do something about it. They can write to the President about changes they’d like to see or not see in our immigration system, ask their elected official to support or not support Obamacare replace and repeal efforts, or tell Secretary of State Tillerson the approach they’d like to see towards North Korea. 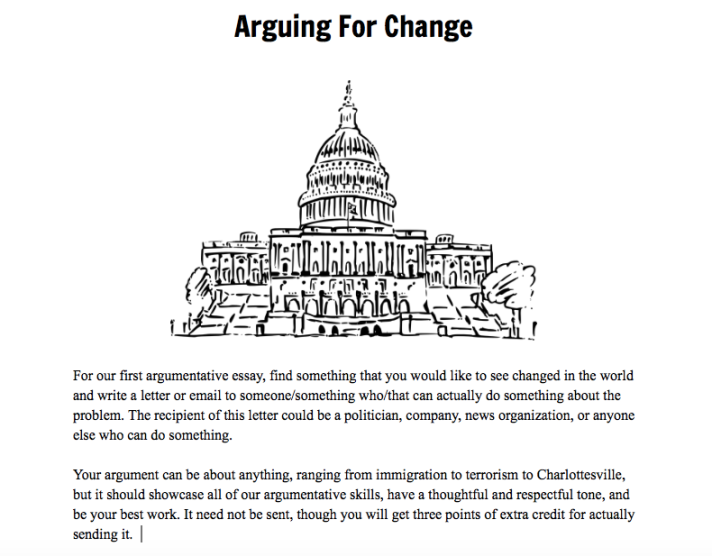 The reason I plan to lead with this assignment, beyond giving the students a safe place to grapple with a current issue that is weighing on their minds, is that time and again students learn the elements of an argument better when they are writing about something they strongly care about to an audience that extends past the teacher. And while the reasons for this are pretty straightforward (they want to do justice by an important topic and don’t want to come across poorly to someone in the outside world), finding topics that students care about and actual non-teacher readers can be tricky. By opening class to the events and arguments of the wider world, it becomes a lot easier to find authentic audiences and arguments that the students authentically care about, and that can make a huge difference in how much students learn 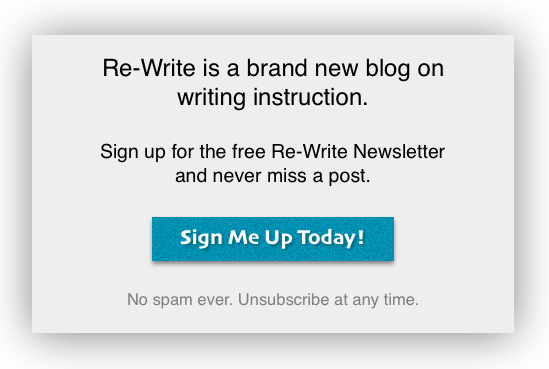