The Importance of Wonder

We in Michigan are right at the point in November where the fall takes a sharp turn from crisp mornings, beautiful red and yellow trees stretching as far as the eye can see, and apples so sweet that you question why you eat anything else to a barren, cold, and fruitless landscape that suddenly seems cloaked in darkness most of the time.

It is during these next cold, dark months, when the grind of school can cultivate a malaise in even the most bubbly students, that I make a conscious effort to regularly infuse my writing classes with what I think is one of the most important tools in a teacher’s pedagogical toolbox: wonder.

Wonder by definition is what happens when surprise intersects with admiration of something amazing, and the reason it is so important is probably best explained by Andrew Stanton, who wrote a Toy Story, Wall-e, A Bug’s Life, and Finding Nemo, in his TED Talk on storytelling (which is worth using excerpts from in creative/narrative writing classes; watch out for a pretty salty joke in the first minute if showing this to classes).

In it Stanton says the following:

I walked out of [Bambi as a five year old] wide-eyed with wonder. That’s what I think the magic ingredient, the secret sauce, is. Can you invoke wonder? Wonder is honest, it’s completely innocent. It can’t be artificially evoked. For me, there’s no greater ability than the gift of another human being giving you that feeling –to hold them still just for a brief moment in their day and have them surrender to wonder. When it’s tapped, the affirmation of being alive, it reaches you almost to a cellular level. And when an artist does that to another artist, it’s like you’re compelled to pass it on. It’s like a dormant command that suddenly is activated in you, like a call to Devil’s Tower. Do unto others what’s been done to you.”

What makes wonder so essential in both storytelling and teaching writing is that wonder  is an incredibly potent motivator. Wonder regularly inspires fans to wait in lines for days to see their favorite Marvel stars for a few minutes at comic conventions or to go on the road with their favorite bands. Wonder inspires people to spend thousands of dollars to fly across the world to touch Macchu Pichu or The Eiffel Tower. Wonder inspires people to read the entire Harry Potter series 18 times and name their first born after a favorite character. And wonder, properly deployed, can inspire students to throw themselves into the difficult and scary task of writing in ways that will surprise both you and them.

My favorite example of the impact wonder can have on writing came during my first year of teaching in 2007. I taught 7th grade that year, and that fall was when Harry Potter hype reached its zenith. I don’t think there was a student in my class who wasn’t at least pretending to read the newly minted Deathly Hallows and many of them lived with it attached to them like an extra appendage. Due to this excitement, I decided to begin the year with a hero’s journey unit where I taught the students that Harry Potter was just the newest installment of the ancient, highly-prescribed hero story and then had them write their own stories that followed hero’s journey steps. The assignment had a minimum of two pages (and no maximum because I was 22 and thought it unnecessary), and yet when the final drafts came in, the average length of the papers was nearly 20 pages and two closed in on 100 pages.

I have never had an experience in the classroom quite like having student after student walk up with paper stacks so thick that they are clipped because a stapler couldn’t get through all the pages. In the end the stack of them stood nearly a foot tall. When I reflect on what led to such a tidal wave of enthusiasm, it is very clear to me that the student’s adoration of Harry Potter combined with the unexpectedness that Harry Potter was the same story as Star Wars and The Lightning Thief series (two other favorites in those classes) led to a wonder that fueled their excessively long stories.

This was my introduction to wonder, and since then I have consciously used it to great effect many times. One of my favorites from this year came in my American Lit. class when I was teaching the difficult art of analyzing literature. The day before my lesson on analysis, I got into a debate with two other English teachers in the staff room about Huck Finn and what Tom and Huck represent. This gave me the idea to model analyzing literature for my students by giving them the three arguments from the three teachers with no names attached and have them declare a winner. Here is the assignment description: 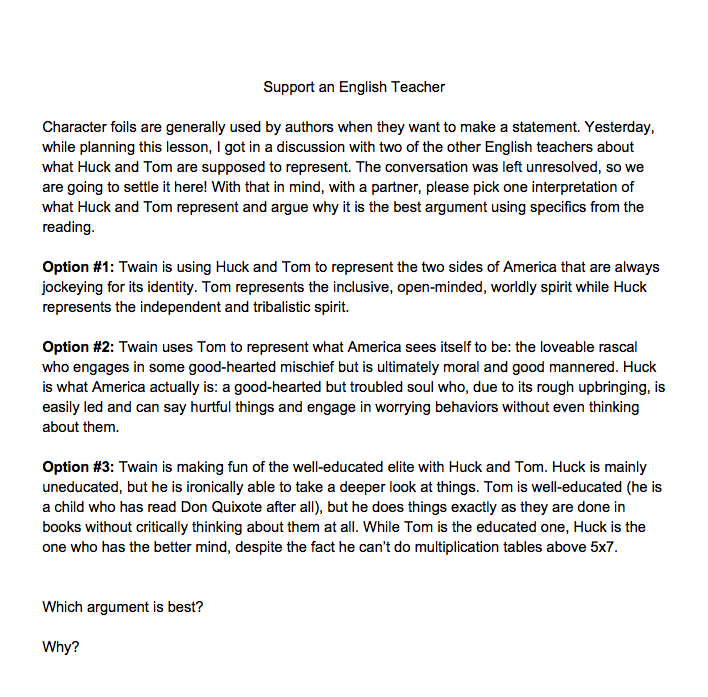 While this seems like a strange candidate for an activity that evoked wonder, the students were so surprised by the fact that they were being asked to judge teachers instead of the teachers judging them and so amazed by the fact that three teachers they like could take the same characters and go to such wildly different places that they were enthralled. They also grew obsessed with figuring out which teacher said each, which led to a level of syntactic close reading that I’d previously only dreamed of. When I finally revealed who’d said what and that the class had voted my analysis as the winner, a roaring cheer organically erupted from all corners of the room. Even more exciting though was that when I asked them to write analysis themselves right afterwards, it also turned out to be the deepest, most thoughtful literary analysis I’d seen thus far this year.

In the end, I wish I could give you a magic formula for wonder, but the fact is that it depends on the student, teacher, and context. The same wonder inspiring lesson for some students will inspire yawns in others. But I do believe that nearly all teachers–if they look for it–have avenues to wonder that they can incorporate in their classes from time to time, and it would not be hyperbole to say that that wonder, thoughtfully used, can animate an entire unit or assignment in a way that would hardly be possible without it.

So this dark winter season, don’t forget to look for wonder, and thanks as always for reading!

Let me help you!

Teachers are busy–too busy–so we need to share with each other. That is why this blog exists. I’ve studied and written about writing instruction for over ten years and would love to share what I’ve found with you. Join my mailing list now and I will send you a thoughtful post about teaching writing each week. As a thank you, you will also receive a copy of my free ebook A Game of Inches: Making the most of your feedback to student writing and deals on my upcoming book from Corwin Literacy on how to give feedback faster and better.

One response to “The Importance of Wonder”