Chasing a Unicorn Part I: How to cut down grading time without sacrificing quality

If I was a member of the American Dialect Society, my vote for Word of the Year would be the word unicorn. The word, long monopolized by the six and under, My Little Pony set, has undergone a renaissance and suddenly appeared in the vernacular of almost everyone (student and adult alike) I know with a new meaning: someone or something who/that is the unattainable perfect ideal who/that only exists in the land of make-believe.

When I first heard this word, my first thought went to what has long been the unicorn for me and nearly every English teacher I know: a way to grade a more reasonable amount without sacrificing quality of instruction. What makes this a unicorn is that the logistics of the problem are seemingly insurmountable. I have five sections with an average of 32 students (less than last year!). That makes 160. If I am able to read and assess an essay in ten minutes, which a blistering pace by most standards, it will take me nearly 27 hours to do 160. And that is for just one essay that I assign. When that context is accounted for, the idea of knocking grading down to a reasonable amount starts to look almost as unlikely as bumping into an actual unicorn. 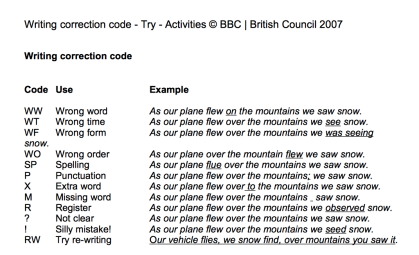 Of course this hasn’t dissuaded entrepreneurial teachers from trying to make it happen. The pursuit of this unicorn has given us many time-saving feedback trends over the years. It has given us the comment code sheet (see right), where students get a key to unlock teacher shorthand; minimalist marking, which was originally designed as a system where the teacher makes check marks in the margins of lines with mechanical errors in the expectation that the students will track down the errors and fix them; and the “assign three papers and then pick one at random to actually grade” approach. These are just three of innumerable writing feedback techniques designed to cut response time that have caught on in the past but not stuck in any sort of major way because the results and research just weren’t there to back them up.

In the absence of something better, the majority of teachers in this country generally revert back to the tried and somewhat-true (more on that in a second) method of snaking comments through margins and capping it off with a note to the student at the end.

I have written before about the common pitfalls that come with margin comments and best practices to avoid those issues and make the most of margin space. If you are curious about these things, here is a mini-ebook I wrote on the subject for NCTE this year. If you don’t have time to read it right now, the core points are that research pretty unequivocally says the following about providing feedback:

But what I haven’t talked about are thoughtful best practices to do everything above and still spend less time grading. When it comes to this, I want to warn you that I have yet to lasso this unicorn completely. It’s elusive, but this is not to say that the pursuit has been in vain. While I still spend a lot of time with papers, I have learned some lessons that have helped me to cut my grading time by roughly 25%. This might not seem like such a big deal, but the average English teacher spends 12,600 hours responding to student writing over a career, which means that shaving off a quarter of that time will save me over 3,000 hours, which is enough to master a language, learn an instrument, write a book, and still have a lot of time left over for family and friends.

Today I am going to share three of the most impactful lessons; look for three more at the end of the week.

#1: Practice What You Preach 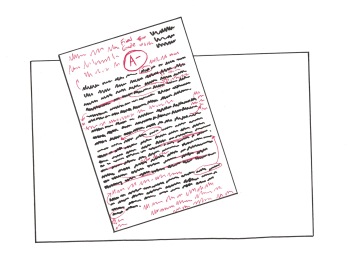 When teachers fill every one of the 38 square inches of margin and mark every error, it often feels intensely right. This is because most of us became English teachers because we love kids, we love language, and we likely loved an English teacher or two while we were in school. And even when we are focusing our feedback on things like organization or sentence structure, when we see a comma splice or capitalization error, it often feels like leaving it alone lets down our kids, who will be judged on such things in the world; lets down our beloved language, which we have devoted our lives to celebrating and passing on; and lets down our mentors, many of whom would have unabashedly sliced and diced such errors with a red pen. Further, extensive margin comments offer justification to our students for the grades we give and as a firewall against politicians, public, and administration quick to find fault.

The end result of this is that even those of us who believe strongly in the importance of being surgical with one’s feedback and not marking everything, can struggle to do this in practice. When it comes to actual papers and students, we often can’t help but mark a few other “little” things along the way. I mean how big of a deal is it to circle some comma errors and point out an awkward transition or two? The answer is that if we make these micro edits on every paper, it can be a very big deal. If I mark even ten additional “little” things per paper, and each of these markings takes me an average of ten seconds, with my 160 students that adds 4.5 hours to my grading load for that paper alone!

When it comes to decreasing my feedback time, there is little doubt in my mind that the most impactful change I’ve made is to simply fight off the temptation to act as an editor and instead practice what I preach!

As a new teacher, I often got into the students’ papers and rewrote their sentences or spent time troubleshooting how to make an awkward transition work. It wasn’t until I read Carol Jago’s classic on paper grading Papers, Papers, Papers that I thought about the fact that while this comes from a good place, rewriting student words is problematic for a couple reasons. First, as Jago mentions, research has regularly found that “many students [respond] with resentment when a teacher [rewrites] their sentences.” This makes sense, as the message sent to students by this is that I don’t trust you to actually do it right. Second, when we troubleshoot student sentences, we are actually doing the most important work for them. They need to be the ones grappling with problems, as that is exactly what writing is and how one learns! And lastly, doing this takes a lot of time, as sentence level fixes are rarely easy or quick.

Put all of this together, and the result is that cutting out the practice of fixing sentences will not only save you time, it can potentially improve your practice because it will put more of the important work on students and avoid areas of potential offense that could hurt student motivation to write. I have heard some teachers worry about not being able to show students the right way if they don’t make changes on the paper, but I have found that if a teacher has a strong stable of mentor sentences/texts, these can demonstrate concepts just as well, without adding extra feedback time or invading the student writing.

This is an idea that I got from Dave Stuart Jr. in this post right here. The idea is that when we catch the next episode of Stranger Things with a stack of paper in our laps, we aren’t actually relaxing and working at the same time. Instead we are toggling back and forth between two very different things that would both prefer for us to be fully engaged with them. This is not unlike trying to hold two simultaneous arguments with two people–not only is doing this profoundly difficult; in the end you won’t do your best in either realm. So to paraphrase Dave: When grading, just grade. When relaxing, relax. You will do a better of job of each and save a lot of time in the process.

These three lessons have helped me to get closer to the feedback unicorn, and I hope they do the same for you. But in the end, what might ultimately be the best way to cut down your feedback time without sacrificing quality is to look closely at your feedback practice. In many ways grading papers is so ubiquitous in education that we don’t give it a second glance, but when we do, there are often relatively obvious fixes staring us straight in the face that could down grading time by 5, 10, or even 20%, and that can add up to hundreds or even thousands of extra hours over our careers without negatively impacting our instruction at all!

Thanks as always for reading, and look for more tips coming soon.