A Note from Matt: T.S. Eliot once said that April is the cruelest month. With respect to him, from a teaching perspective I find that this moniker likely belongs to October instead. What makes October a sometimes cruel month is in part its busyness, with its parent/teacher conferences, curriculum nights, and piles of letters of recommendation. The first major assignments also come home to roost in October, suddenly adding to our workload, and while the year is well underway, a major break still lies far beyond the calendar’s horizon.

But for me, what tips the scales for October is that it is when the lofty dreams of the summer run into the realities of the actual classroom. The result is that my once pristine plans from August, if they were a suit finely tailored on the first day, already have tears and stains from missteps, holes from days missed (especially when one has small children with eternally runny noses during a pandemic), and quickly crafted alterations whose seams show if one looks close enough. Of course, I don’t mean to imply that my classes are going poorly; they are actually going better than I could have hoped for coming off the online/hybrid format of last year. Even still though, they will never quite match the dreams of the summer.

This is all to say that October, at least for me, is an odd month. It is one of the times where I am the most hungry for new ideas, tricks, and tips to patch holes that have appeared in my plans and pedagogy, but it is also a hard time for things like prolonged attention and deep and lofty pedagogical debates due to my busy schedule. With this in mind, my posts over the next month are going to be a series of things that are, to paraphrase Helena in A Midsummer Night’s Dream, little but fierce. These are some quick ideas and tricks that have made a meaningful impact on my classes and yet can be understood and implemented in just a few minutes. First up is probably my favorite right now: Letting the students lead when it comes to feedback.

The normal order of operations when it comes to feedback in a writing classroom is that a student writes something, the teacher then provides feedback, and any further discussion proceeds from that point.

For years that was my approach, but last winter, inspired by New York Times Learning Network’s Annotated by the Author series*, I began asking students what kind of feedback they needed before I made a single keystroke. The idea was to get students more regularly annotating their own work and was also an extension of a “students talk first” policy that I already used with conferences and assessment.

Asking students what they need from feedback only takes a couple minutes of class time to explain and execute, and the answers take no more than a few seconds per student to read, and yet the results for me have been game-changing.

Here is the slide that I use to do this and a few examples of the kinds of responses I always get: 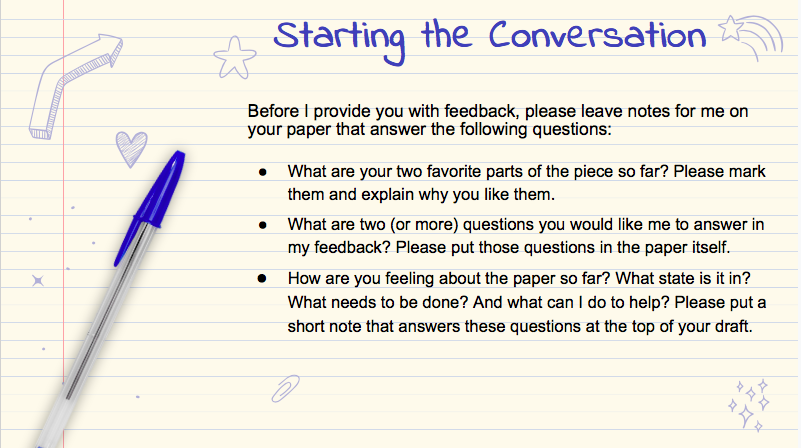 And Some Student Examples

When I first did this, the deeply insightful student thoughts and requests I received instantly had me wondering why I didn’t do this earlier (and wishing I had put it in Flash Feedback). If, as a writing teacher, I want students to be the captains of their own writing processes and to track their own growth as writers, the students need to be a meaningful contributors to the conversation. And a great way to ensure this is by having them start the talking.

As I mentioned above, I learned years ago that when students lead in conferences and assessment, it is good for them and the teacher. Last year I learned the same is true for feedback. For the students, being able to speak first gives them the opportunity to say what they need unencumbered by the intense gravity of a teacher’s words. For the teacher, when a student speaks first, it doesn’t limit what they can say. On the contrary, when students have a blank page, they are exceptionally good at telling us exactly where they are at and what they need–information that will allow us to better calibrate our responses to the student work so that we can give them both better and faster!

Thanks for reading, and yours in teaching,

*For more on my journey with students annotating their own work, click here. Also, for those who don’t know about the Annotated by the Author series, it is where winners of the Time’s student contests unpack and explain their winning pieces both in writing and videos. The short videos in particular are just right for introducing or reinforcing a range of writing concepts, and I highly recommend them and use them frequently. For example, just last week we used Varya Kluev and Elizabeth Phelps’ insights to into their pieces to seed a conversation about how to artfully extend metaphors, and all fall I have been sharing Ananya Udaygiri’s explanation of why she picked Animal Crossing as her topic to help my seniors pick the right college essay topics for them.

If You Liked This…

Join my mailing list and you will receive a thoughtful post about finding balance and success as a writing teacher each week along with exciting subscriber-only content. Also, as an additional thank you for signing up, you will also receive a short ebook on how to cut feedback time without cutting feedback quality that is adapted from my book Flash Feedback: Responding to Student Writing Better and Faster – Without Burning Out from Corwin Literacy.

2 responses to “A Little But Fierce Feedback Trick: Letting Students Start the Conversation”